New York, March 4 : While describing the US engagement with India as a “global comprehensive strategic partnership,” the State Department has reiterated Washington’s policy of a de-hyphenated relationship with India and Pakistan saying it is “not a zero-sum.” 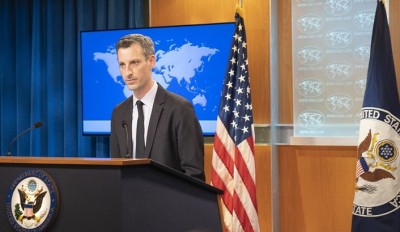 Speaking of the US relations with the two neighbours, the US State Department Spokesperson Ned Price on Wednesday made a distinction between the global dimension of its partnership with New Delhi and its shared regional interests with Islamabad.

“When it comes to India, we have a global comprehensive strategic partnership,” he said.

The importance of the partnership has risen as the challenge from an increasingly hostile China has grown.

With Islamabad, “we have important shared interests in the region. And we will continue to work closely with the Pakistani authorities on those shared interests,” Price said.

The US needs Islamabad’s help to deal with the Taliban in Afghanistan if the President Joe Biden is to go ahead with the deal his predecessor Donald Trump made with the insurgent group to withdraw all US troops on May 1.

As its patron and leadership refuge, Pakistan wields influence over the Taliban. On the other hand, Islamabad is also closely aligned with Beijing at a time when Washington is challenged on the global stage by an aggressive China.

“United States has important relationships with India, as I said, but also with Pakistan. These relationships stand on their own in our view. They are not a zero-sum proposition when it comes to US foreign policy,” he said replying to a question at his daily briefing on Washington’s relations with the two neighbours.

Referring to the strategic ties with India, he said, “This (fiscal) year, the United States has authorized over $20 billion in defence sales to India. It’s these offers of advanced US defence platforms that demonstrate our commitment to India’s security and sovereignty. It demonstrates our commitment to that global, comprehensive, strategic partnership.”

On Kashmir, Price said, “We welcome steps to return the Union Territory of Jammu and Kashmir to full economic and political normalcy consistent with India’s democratic values.”

He said that “certainly as the State Department, we continue to follow developments in Jammu and Kashmir closely” and the US policy “when it comes to it has not changed.”

However, there may be a nuance in his reference to Jammu and Kashmir as a “union territory.”

A reporter asked if for Washington Kashmir was not “controversial anymore,a¿ if it wanted a reversal of the revocation of Article 370 of the Constitution, and if it considered Kashmir India’s territory or a “disputed territory.a¿

Price would did not engage the reporter on those questions directly and only said, “What we have done is we continue to support direct dialogue between India and Pakistan on Kashmir and other areas of a” and other issues of concern. Of course, we’ve continued to call for a reduction of tensions along the line of control, returning to that 2003 ceasefire.”

In August 2019, India rescinded Article 370 of the Indian constitution which gave Kashmir special status and downgraded it to a union territory.

Asked by the reporter if Secretary of State Anthony Blinken had raised the Kashmir issue with India’s External Affairs Minister S Jaishankar, Price said, “We issued a readout of that call, so I would refer you to the readout of that conversation.”

When the reporter said the readout did not mention Kashmir, Price said, “I wouldn’t want to go beyond the readout.”

Blinken had spoken with Jaishankar twice directly — on January 29 and February 9 — and once along with the other two foreign ministers of the Quad, Japan’s Toshimitsu Motegi and Australia’s Marise Payne — on February 18.

None of the three readouts mention Kashmir.

During the election campaign last year, Biden had communalised the Kashmir issue by adding it in his “Agenda for Muslim Americans.”

The manifesto appealing to them said, “In Kashmir, the Indian government should take all necessary steps to restore rights for all the people of Kashmir. Restrictions on dissent, such as preventing peaceful protests or shutting or slowing down the Internet, weaken democracy.”

But once in office, Biden is having to deal with the geopolitical realities of the rising threat from China and has to have India as a strategic asset for meeting the challenge.

While speaking about US efforts to bring back democracy in Myanmar, Price called India a “key partner” in the Indo-Pacific region and said Blinken had discussed the situation in that neighbour of India with Jaishankar.

“India and Japan are key partners in the Indo-Pacific and key partners that we will continue to work with towards our collective goal of seeking a restoration of Burma’s democratically elected civilian government,” he said.