Visakhapatnam, March 3 : Telugu Desam Party (TDP) leader Ganta Srinivasa Rao who recently submitted his resigned as the Visakhapatnam North MLA has condemned speculation that he would be joining the ruling Yuvajana Sramika Rythu Congress Party as mentioned by V. Vijayasai Reddy on Wednesday. 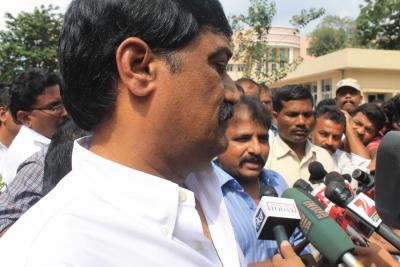 “Before, during and after the 2019 general elections, more than 100 times already, it was publicized (on shifting party). Sometimes they have even declared the dates and auspicious time that I will be joining YSRCP,” said Rao.

He said that the speculators even mentioned Bharatiya Janata Party (BJP) as one of the parties he would join and now they are saying YSRCP.

Though these kinds of reports are emerging, Rao said that he has been regularly condemning them but claimed that he had no clue as to why Reddy speculated on Wednesday.

“I do not know with what goal Reddy suddenly spoke on Wednesday. Reddy should answer as to what proposals I sent,” he said.

Reddy, a senior YSRCP leader and Rajya Sabha MP claimed that Rao was getting ‘attracted’ to the ruling party.

“His (Rao) coming into the party is subject to the party president approving it and the legislators coming forward, he will definitely be taken in,” claimed Reddy.

However embarrassingly, Rao noted that the MP making this statement within a few days of elections points towards a YSRCP game plan.

“As he said with his own voice that I made some proposals, even I want to know from him what those proposals were. It is a mistake to think that I will also change just because some people changed,” he asserted.

The TDP leader clarified that if the situation arrives that he really needs to change a party, then he said that he will definitely talk to everybody and proceed with that purpose boldly and publicly.

Rao said that he would not go in stealth without telling anyone by taking a decision one fine morning and changing the party that next day. He said he has no such idea.

However, hopping political parties is nothing new for Rao, who shifted several times between TDP, Congress and erstwhile Praja Rajyam Party (PRP).

Despite the political musical chairs, thanks to Rao’s loyal electorate, he has been winning consistently and surprising one and all.

On Wednesday night, he campaigned for TDP for the forthcoming urban local bodies polls and proclaimed that TDP will definitely win Visakhapatnam mayor’s post.

“51st ward is a TDP stronghold. TDP’s victory in this ward is a cake walk,” Rao claimed. Eom/453 words