Jaipur, March 5 : The much-talked about power yatra to be taken out by former Chief Minister Vasundhara Raje from March 8, which falls on her birthday, has now been limited to a religious yatra only. 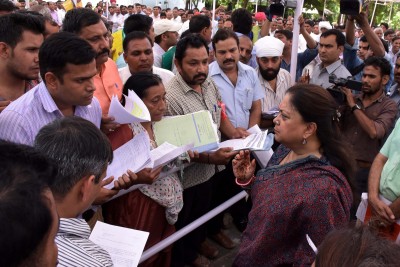 As per the latest schedule, Raje shall leave for Bharatpur from Jaipur on March 7 in the morning from where she will go to Jatipura Giriraj Mandir via road and then to Aadi Badri Mandir.

She shall stay in the same temple and offer prayers here on March 8 on her birthday.

She will visit other temples too and then will leave to Dholpur via Helicopter from Bharatpur.

A staunch Raje loyalist, Pratap Singh Singhvi, on his social media post said: “A religious programme is being organised on the occasion of 69th birthday of Raje to pray for her health and long life. In this process, Raje will tour the temples of the said region and offer her prayers. Her followers shall extend greetings to her during this programme.”

BJP sources have confirmed that the much-proposed political yatra of Raje has been limited to religious yatra owing to the recent visit of BJP National president J.P. Nadda who openly asked leaders to do self-analysis.

“Knowingly or unknowingly, we all assume that we know everything. However, this is the beginning of stagnation… the truth is that our productivity decreases…,” he said.

“I request everyone here to do self-analysis. What is your commitment, your relevance? Politics is a place where you have to be relevant.

“Relevance means how much are you contributing to the party… how much are you acceptable. As a leader, you will have to develop the quality of taking along everyone which will increase your acceptance, he said in a candid address.

Earlier, Raje’s Power Yatra was being planned on a grand scale in various districts of Rajasthan. A huge convoy was prepared to participate in the yatra, however, the programme was changed at the eleventh hour, sources said.