Panaji, March 3 : Goa’s only major port, the Mormugao Port Trust, operated by the Centre is planning to develop a ferry circuit to cater to the international cruise ship tourists visiting the state. 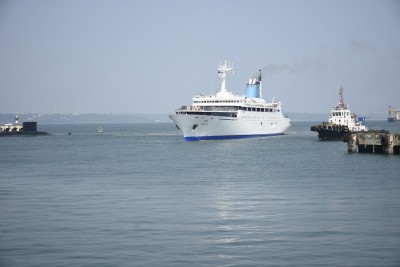 Speaking virtually at the Maritime India Summit 2021, Chairman of the Trust E. Ramesh Kumar said that the ferry service would connect several beach destinations in the coastal states, both in North Goa and South Goa districts.

“With a dedicated colour-coded ferry service, we are also contemplating to receive passengers on the other side with hop-on-hop-off buses, with the same colour codes with refreshments served en route, multilingual audio commentary,” he also said.

The top official also said that the Port Trust was also in the process of setting a commercial hub spread over 4,000 sq mt area near the port terminal itself for visiting cruiseship holidayers.

“There is a unique feature of this commercial hub which is going to be primarily designed to depict the old Goan culture imbued with modern facilities. It also embodies in it the rich culture of various states and exhibiting three essential ingredients whether it is handicraft, handloom or the cuisine of various states or the cultural forms including music and dance,” Kumar said.