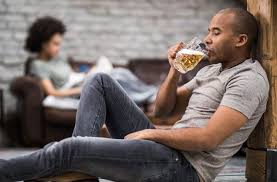 Viral News Boy :– Although alcohol can make a person feel happy, pleasant, and sociable in short periods of time, excessive or chronic, long-term drinking can lead to alcohol dependence or alcohol addiction, officially referred to as an alcohol use disorder.

Men are more likely than women to drink excessively.

Excessive drinking is associated with significant risks to men’s health and safety, and the risks increase with the amount of acohol consumed.

Here Are 8 Effects Of Excessive Alcohol Intake, Especially In Men

The liver is an organ which helps break down and remove harmful substances from your body, including alcohol.

Long-term alcohol use interferes with this process. It also increases your risk for chronic liver inflammation and liver disease.

Alcohol is mostly metabolized in the liver, which is why the liver is particularly at risk of damage.

The body metabolizes alcohol into acetaldehyde, a substance that is both toxic and carcinogenic.

Alcoholic liver disease is influenced by the amount and duration of alcohol abuse. Chronic, heavy drinking poses a substantial risk for its development.

Drinking too much alcohol can cause abnormal activation of digestive enzymes produced by the pancreas.

Buildup of these enzymes can lead to inflammation known as pancreatitis. Pancreatitis can become a long-term condition and cause serious complications.

Excessive alcohol use can interfere with testicular function and male hormone production resulting in erectile dysfunction and infertility.

Alcohol depresses the central nervous system which can make it difficult for some men to get, and keep, an erection.

Importantly, alcohol alters the chemicals in our brains, including the part associated with inhibition.

So men are far more likely to act in an uninhibited way when they have been drinking.

Unprotected sex is far more common when alcohol is involved, and this can lead to sexually transmitted diseases and unplanned pregnancy.

Some people who drink heavily may develop a physical and emotional dependency on alcohol. Alcohol withdrawal can be difficult and life-threatening.

You often need professional help to break an alcohol addiction. As a result, many people seek medical detoxification to get sober.

Drinking too much weakens the immune system, making the body vulnerable to infectious diseases, such as pneumonia and tuberculosis.

A drop in the white blood cell count can occur due to alcoholism. This happens because the body’s production of white blood cells is suppressed, and the cells become trapped in the spleen.

While cirrhosis and liver cancer are the two primary health concerns for both men and women with long-term alcohol dependence, there are certain conditions for which a man is more likely to die.

According to research from the School of Public Health at the University of Minnesota, there are certain health conditions for which alcoholic men are at higher risk of death.

When compared to a matched set of men and women over the age of 65, the researchers found that:

Men were twice as likely to die of liver cancer.

Men were more than four times more likely to die of mouth, throat, or oesophagal cancer.

Men were three times more likely to die of a stroke.

Men were more than twice as likely to die of alcoholic liver disease.